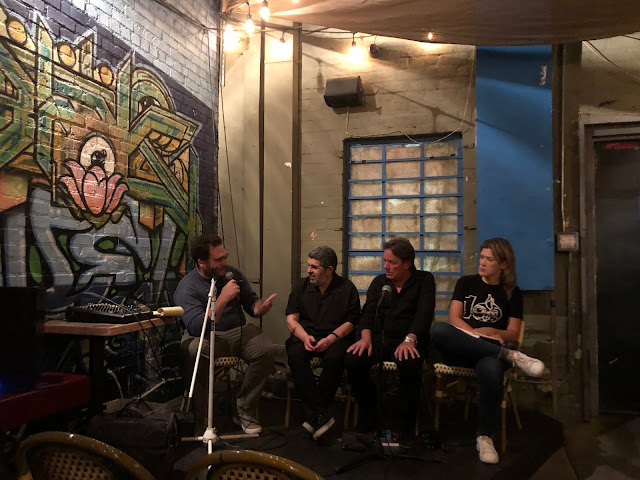 Rock 'n' roll electrocutions, Siberian nightmares and the most dangerous occupation in show business were the hot topics at Stories Books and Cafe on Sunset Boulevard last night as the hosts of Eagle Rock's popular podcast Shut Up I Love It gave another grilling to the authors of The Show Won't Go On.

Sasha Feiler and Steve Cohen had hosted authors Jeff Abraham and Burt Kearns on Shut Up I Love It last month. On the show in which guests defend unpopular or controversial pop culture figures and works.  Jeff and Burt spoke movingly about their idol Jerry Lewis and his (unfairly, they insisted) maligned film, The Day The Clown Cried.  This time, onstage at the iconic independent bookstore in Echo Park, the topic was the acclaimed new book about "the most shocking, bizaatte and historic deaths of performers onstage.”

It was an informative, often funny show that featured actual fireworks when a colorful, awesome display went off in the sky just a block away from the patio on which rows of theatre-style chairs have been arranged for the book event.

Feiler and Cohen were as witty and charming as they are on their podcast.  Sasha Feiler took the topic to an intimate level when she spoke of growing up in Siberia, and how the death onstage of a Russian movie star had haunted her since childhood and led to a special interest in death and celebrity.

(Following that revelation, Jeff and Burt went to their volumnious archives. "Sasha was most likely talking about  Andrei Mironov," Burt tells us. "He was a movie star who was the leading man in popular Soviet films including The Diamond Arm, Beware of the Car and Twelve Chairs.  He was also a singer, and performed onstage. On August 14, 1987, he was at the Riga Opera Theatre in Latvia, performing the lead role in The Marriage of Figaro, when he collapsed onstage.  He died in a hospital two days later.  He was 46. Cause of death? A cerebral aneurysm. The LA Times reported that 'scores of thousands' of Muscovites turned out for his funeral."

Thanks, Burt -- "Closer to home, the classical pianist Mikhail Klein actually died onstage in Siberia two years ago.  He was performing with the Irkutsk Philharmonic Orchestra in Irkutsk.  I don't want to add to Sasha's trauma, but Klein was playing a jazz number he wrote called 'This Is All Russia' when he slipped from the bench and wound up in a heap at the foot of the grand piano.  Heart failure at 72.”


Another poignant highlight of the evening was Burt's tribute to Stories Books and Cafe as "one of the last literary temples" in Los Angeles, and to influential author Nick Tosches, who died over the weekend.  Tosches was a friend to the folks who run the literary website, PleaseKillMe.com. Burt and Jeff are frequent contributors to the site, and one of their stories, The Death of Cathy Wayne, an outtake from The Show Won't Go On, was a topic at last night's event.

The group discussion was recorded and may wind up as a bonus episode of Shut Up I Love It. We'll keep you posted on that and the next stop on the roadshow for The Show Won't Go On: the Most Shocking, Bizarre and Historic Deaths of Performers Onstage.

UPDATE: THE STORIES BOOKS DISCUSSION
IS NOW A SPECIAL BONUS EPISODE
OF SHUT UP I LOVE IT!
(CLICK TO HEAR)