The Show Won’t Go On: A dark, delicate subject gets a lively response at Burbank’s legendary Dark Delicacies bookstore 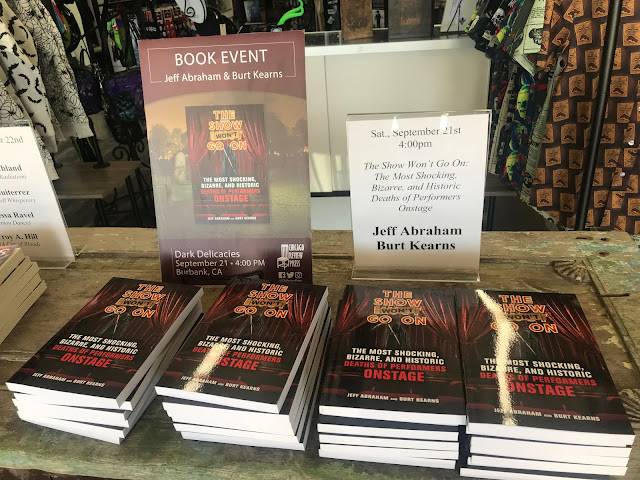 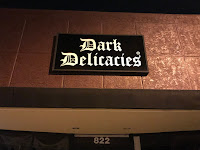 The Dark Delicacies “home of horror" book store and gift shop in Burbank was the second stop for  the "died-onstage" roadshow by Jeff Abraham and Burt Kearns, authors of The Show Won’t Go On: The Most Shocking, Bizarre, and Historic Deaths of Performers Onstage.

Just as the book highlight the careers and final scenes of performers from many genres of the performing arts, so was the crowd that jammed the aisles at Dark Delicacies Saturday afternoon populated by major players in from all walks of show business, including television, film, literature, memorabilia broadcast journalism -- even professional wrestling. 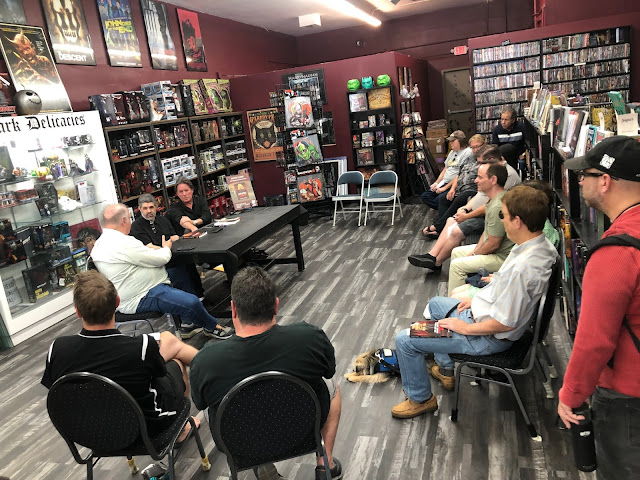 Dark Delicacies owners Del and Sue Howison were gracious hosts for the event, and the ever-witty and cheerful Del launched the discussion by introducing guest moderator Mark Evanier. The renowned writer, producer, show business historian and comic book and cartoon legend brought real insight and knowledge to the questions fielded by Abraham and Kearns in a lively -- and laugh-filled affair.

Hours earlier, Abraham and Kearns had been featured on National Public Radio’s Weekend Edition Saturday program, in an interview with host Scott Simon. Simon revealed that he had personally experienced a “death onstage” thirty years ago, when haiku poet Nick Virgilio suffered a fatal heart attack in the NPR studio while Simon was interviewing him.

Dark Delicacies is known for its gleeful embrace of death, and the Howisons managed to give Burt  a chill when they mentioned that actor Dick Miller, filmmaker Larry Cohen and wrestling legend and They Live star “Rowdy" Roddy Piper -- all died within weeks of appearing at Dark Delicacies signing events!

More Southern California dates are ahead for the deadly duo of Abraham and Kearns: October 19 at the Dearly Departed Artifact Museum in Hollywood and October 21 at Stories Books and Cafe in Echo Park.

Posted by The Good Story Team at 1:02 PM