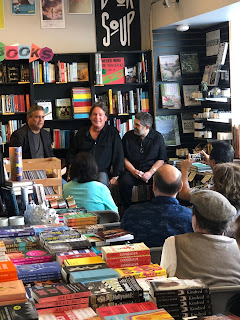 Book Soup, the legendary “bookseller to the great and infamous” on the Sunset Strip, hosted both on Sunday as the authors of The Show Won’t Go On debuted the first of their live discussions and signings for a crowd that indeed included the great, infamous and acclaimed.


Cowriters Jeff Abraham and Burt Kearns turned out to be great raconteurs, and had the audience enthralled with stories from the book about “the most shocking, bizarre, and historic deaths of performers onstage.” A lively question-and-answer session followed.

A special treat for the audience was the appearance of guest moderator Ray Richmond.  The popular and esteemed journalist, entertainment critic, author and playwright set the stage and tone for the afternoon by reminding Abraham and Kearns that the best possible publicity for their book would be for one of them to keel over and pop his clogs right then and there.  (Abraham reminded the crowd that Richmond had moderated a discussion featuring Abraham's client George Carlin days before the legendary comedian suffered a fatal heart attack.) 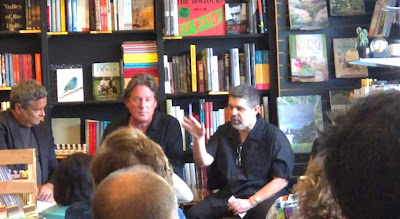 While all who attended survived, the book event was almost declared DOA that morning.  Hours earlier, an automobile careened out of control down Sunset Boulevard and plowed into the “parklet” of Book Soup tables and benches on the street. Miraculously, no one was seated (or, as too often, sleeping) there at the time.  Most of the car (see photo below) was hauled away before the book event, and the discussion and book signing went off without a hitch. 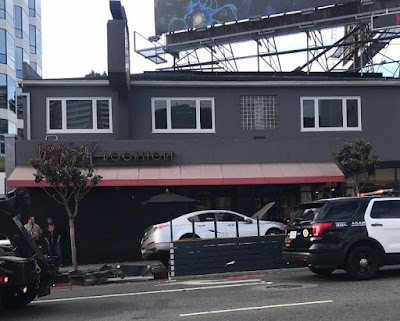 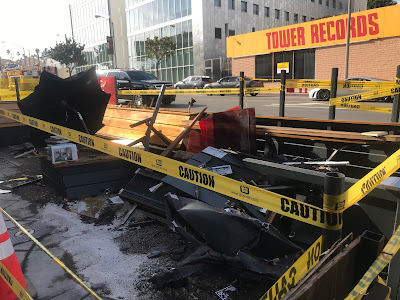 Numerous celebrities and performers were among the crowd, including top magicians, authors, producers and at least one multiple Tony award winner. We will, however, respect their privacy...


The Show Won’t Go On was published by Chicago Review Press on September 3.  It’s received very positive reviews, and is available wherever books are sold.


Abraham and Kearns continue their roadshow on Saturday, September 21 at Dark Delicacies on North Hollywood Way in Burbank. That event, moderated by comic book and comedy legend  (and top entertainment blogger) Mark Evanier, kicks off at 4 pm.

Future events include the Dearly Departed Artifact Museum in Hollywood on Sunday, October 19, and Stories Books and Cafe in Echo Park on Tuesday, October 22.

Due to the writing duo’s lively and very entertaining performances on widely-heard shows including Gilbert Gottfried's Amazing Colossal Podcast and Coast to Coast AM, there has been demand for appearances in other cities beyond Los Angeles. Watch this space for the latest news.

Posted by The Good Story Team at 9:51 AM